The locks feature in-line, coil spring driven strikers with bushings, trigger/sear arrangement similar to bolt action rifles for excellent trigger pulls, and a safety that blocks both the trigger and sear for protection against accidental discharge. The safety rotates into place, and in testing the design, the safety would not disengage nor did the locks dry fire with severe blows from any angle, yet is easily shifted from "safe" to "fire" 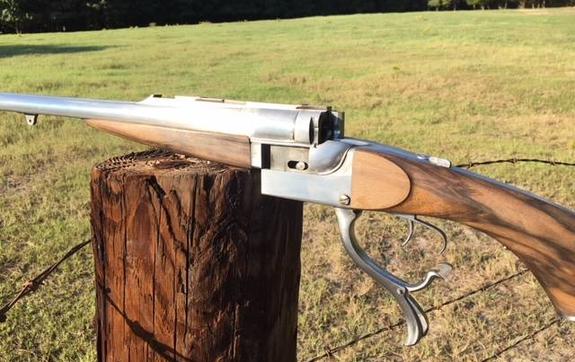 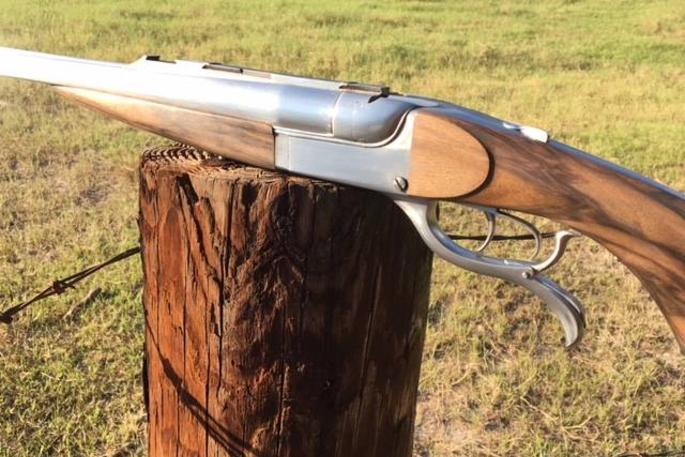 Opening the action is accomplished by lowering the under lever, just like a falling block action. a throw of only 30 degrees fully opens the action, cocks the locks and actuates the extractors. A spur on the under lever pushes the strikers into the cocked position as the lever is lowered. At the same time, the barrels are driven upward, rising out of the frame, and at the last few degrees of travel, the front end of the under lever makes contact with the extractors with force enough to pull nails from a board. The extractors have a camming action giving them acceleration great enough to semi eject the spent cases. Opening a Rising block rifle is done with the barrels level or slightly up, so cases naturally fall out once extracted unlike a break action that requires the barrels to be raised after opening. Reloading is aided by the two troughs on top of the action leading into the chambers.

Running the full depth of the action bar, and precision wire EDM cut to fit with less than one thousandth of an inch clearance, the barrel block locks into place when the action is closed. Massive  bearing surfaces at the front and rear of the block aide in pull away strength and negate barrel flip from trying to open the action. Unlike a break action design, where the standing breech/action bar junction must be strong enough to handle case thrust on sheer ridgidity, the Rising block design marries the strength of a falling block into the case thrust dilemma. With the barrels only path to an open breech being perpendicular to the forces exerted from case thrust, and the full length of the dolls head and depth of the barrel block negating any forward movement of the barrels away from the breech face, the rifle literally has to suffer a complete, destructive failure to open from firing forces. Those forces are distributed over large surface areas in stead of being concentrated at specific points such as underlugs, hinge pins and the breech/action bar junction.

Finally, the Rising block rifle is easily taken down by pushing the pin out linking the barrel block to the under lever. The forend stays attached to the barrels. The link pin is replaced into the under lever, where it is retained by ball detent and of course inside the frame when the action is closed. This allows for easier travel with a shorter case, and multiple barrel sets for each receiver.

By allowing the barrels to rise up and clear the frame, access to the breech is unhindered, even with a scope mounted. The troughs leading to the chambers are an easy guide for quick reloading. With the quick flick of the thumb, the safety can be operated with certainty of position.

Also visible in the above photograph is the dolls head that runs well above and below the chambers, and in conjunction with the side clips that also engage the barrels, provides far more pull away resistance from case thrust than any break action design. 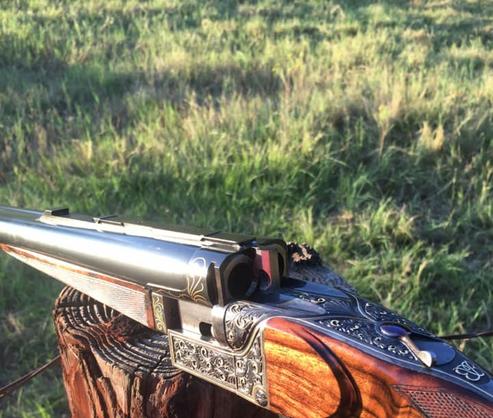 The short throw of the under lever easily allows for one hand closing of the action. Average sized hands can grasp the lever with the fingertips and squeeze the lever into the closed and latched position, leaving the front hand free for reloading or managing shooting sticks. 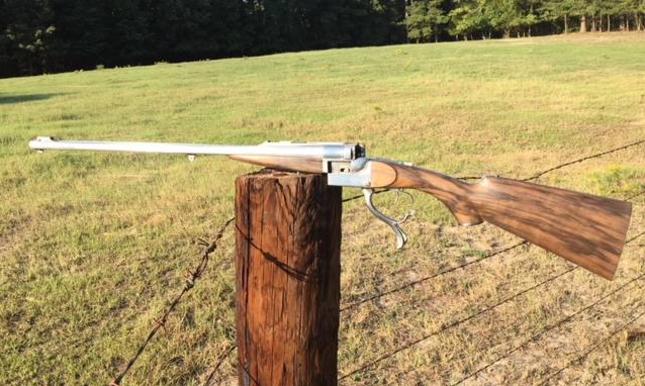 The flagship of my rifle building. An aesthetically pleasing rifle that handles as good as it looks, and is as reliable as the Sun coming up. The qualities of strength, balance, ease of use, flow of line and refined feel all come together into a hunters tool of extreme power and grace.

Rising block double rifles can be made in any rimmed chambering from .22 hornet to .500NE on scaled frames with weight appropriate to caliber.